skip to main | skip to sidebar
Home » Unlabelled » Provence: In Search of Lavender

Provence: In Search of Lavender

We set out early in the morning in search of lavender in our small, euro-rental car with our dog-eared copy of 'Provence in Three Days' and array of rudimentary maps. It was a bluebird day, exceptionally beautiful actually, given that just two days prior, Provence was reporting torrential rains and flooding. In Provence, it was impossible to take a wrong turn given that every place we encountered, whether it was planned or unexpected, was gorgeous. Each turn was like the next chapter in an unfolding novel that you couldn't put down. The streets and roadways are lined with trees on 'plane' or sycamore trees and around every corner there's a landscape worthy of a Monet painting. There are no exits off the highways per-se but rather roundabouts at every new town or bend in the road with rows of very little white signs vaguely pointing to a new highway. I had been dethroned as the navigator, heeding defeat and surrendering to the keen eyesight and youthful exuberance of my teenage daughter; My husband was the fearless driver. My sole responsibility was to lounge about in the backseat, read about the places we intended to go and offer 'fun facts' about the things we stumbled upon. 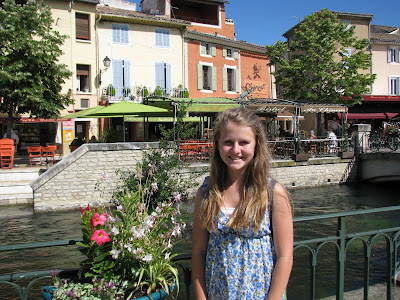 {My daughter in L'Isle sur le Sorgue}
Our first stop for the day was the charming medieval town of L'Isle sur le Sorgue meaning "the island in the Sorgue", well known as the antique capital of Provence. Feeling slightly like a ball in a pinball machine after circling the town and getting spit out of several roundabouts, we finally found a parking place. Let's just say the French cars are very small, and there parking spaces are even smaller! We walked along the canals and meandered along the winding streets, perused a few antique shops and suddenly discovered we were lost. As the ex-navigator and principle lounger, I suggested that we return to the canal and follow it down, and we would surely come back to where we parked. It was my husband {the eagle scout} that noticed the river I intended to follow was flowing in a different direction from the original river. {I have sense learned that the town is built on the islands of the five branches of the Sorgue river and that the river flows in, around and through the town in every direction} Putting my forgotten high school french to use, I asked a french shop owner for the way out. From there, we scouted out the best boulangerie and grabbed some sandwiches and patisseries for the next leg of our journey. We went in search of lavender. 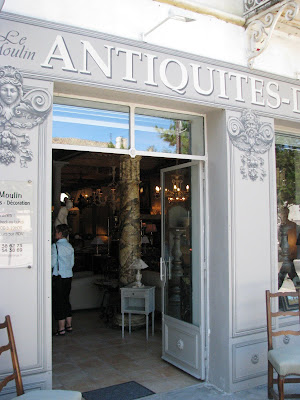 I found a pair of copper lanterns; an ancient french mirror; a pair of bergeres; some incredible olive jardinieres; a stack of crunchy old french linen sheets; and an old mossy fountain that I would have loved to have crated up, shipped across the ocean and had the pleasure of unwrapping on a crisp fall day....another trip, another day! 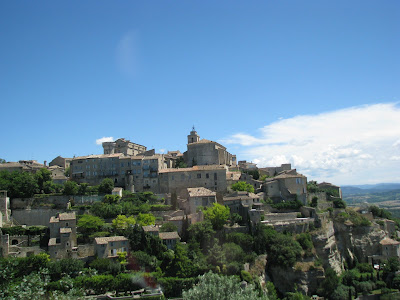 {the picturesque town of Gordes as seen from the road en route to l'abbaye de senanque}
If you google "lavender in Provence" you will undoubtedly uncover a 1000 pictures of the lavender fields of the l'abbaye de senanque. So, after leaving isle sur la sorgue we were en route to l'abbaye when we turned the corner and caught a glimpse of Gordes. I should say we turned the corner and almost ran off the side of the mountain because there was a BMW sedan stopped in the middle of the road with all four of its passengers sprawled out taking pictures while a dozen very, weary bike riders from a Backroads tour made their way up the mountain and a greyhound tour bus made its way down. Now, I had the full attention of my husband who suggested we see the Luberon valley by bike next time, a great thought in theory. 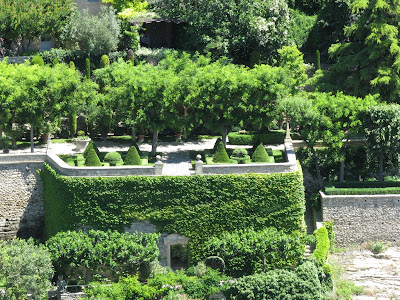 When I returned home from France I was excited to see that my summer issue of Vernada had arrived but what really captured my attention was the cover story featuring a home in Provence! After flipping through the pages, I was almost certain that I had snapped a picture of this very home in Gordes. I couldn't find specific information about where the home was located in the Luberon but definitely thought it captured the essence of the area. The image above is a zoomed in photo of the hillside capturing an amazing topiary garden and ancient, ivy covered wall. 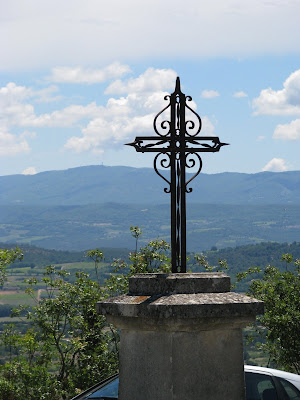 The commanding view of the Luberon valley from the road approaching Gordes. 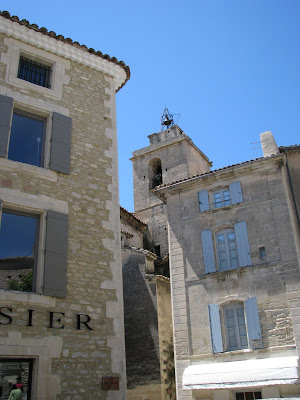 We detoured from our directions to the l'abbaye and went into the town of Gordes to explore. The photo above is a view of Gordes from a piazza in the center of the town 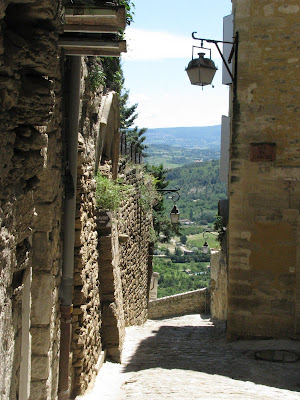 The houses and buildings of Gordes seem to grow out of its cliffs with their white stone foundations. Its labyrthinth of "calades" {narrow cobblestone streets} wind through the village and afford incredible views of the Luberon valley beyond. Although its ancient heritage has been preserved, Gordes is not a museum but a living, breathing village with shops and cafes, hotels and spas. Of course, we took a tour of Gordes and learned that it predates the Romans in France. Up until the 1960's when a wealthy family and a group of artists revived its charm, the village of Gordes had fallen in ruin, hard to believe given that now it is at the center of the luxury tourist industry. We also learned that many of the scenes from the movie "A Good Year" where filmed in Gordes and the Luberon valley. 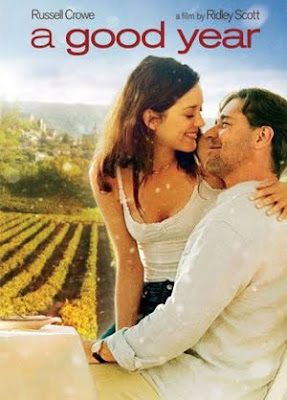 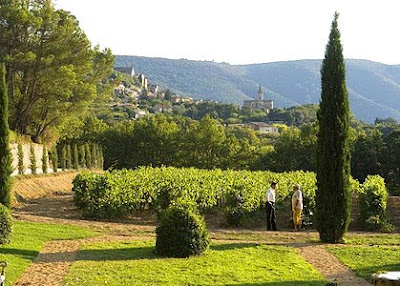 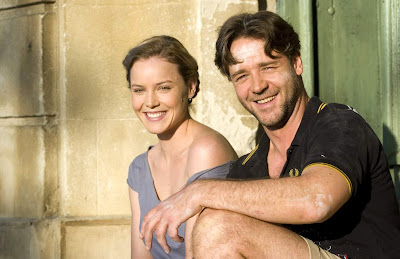 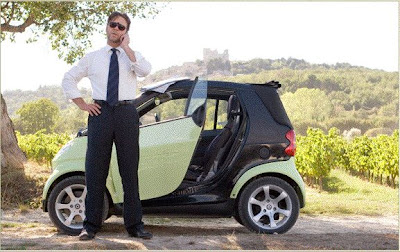 Directed by Ridley Scott and based on the 2004 Peter Mayle novel of the same name, A Good Year tells the story of a 30-something London investment banker (played by Russell Crowe) who inherits his beloved uncle’s Provençal vineyard and run-down 18th-century château. The movie, released in late 2006, was filmed almost entirely in the Luberon during September and October 2005, a glorious time of year when many of the locals were absorbed with the annual vendange or grape harvest. 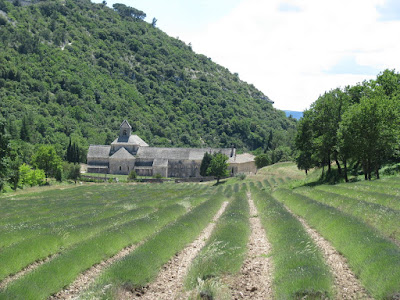 When we reached l'abbaye de senanque, the lavender fields were probably two weeks from full bloom. My picture {above} does not quiet capture the beauty of this landscape or the slight lavender hue of the foreground. What the picture can not show you is the lovely scent that filled the air, cool breeze, bluebird skies and the cool temperatures. We actually needed a light sweater as the temperatures hovered between 60 and 70 degrees. 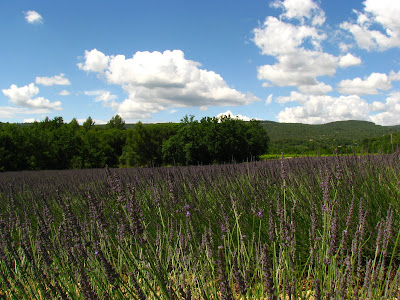 At last, we turned the corner on the way back to Aix and discovered a lavender field in bloom!
{well, close enough}
You have just read the article entitled Provence: In Search of Lavender. Please read the article from Interior Josh About http://storyflash.blogspot.com/2010/07/provence-in-search-of-lavender.html