The Language of Shutters 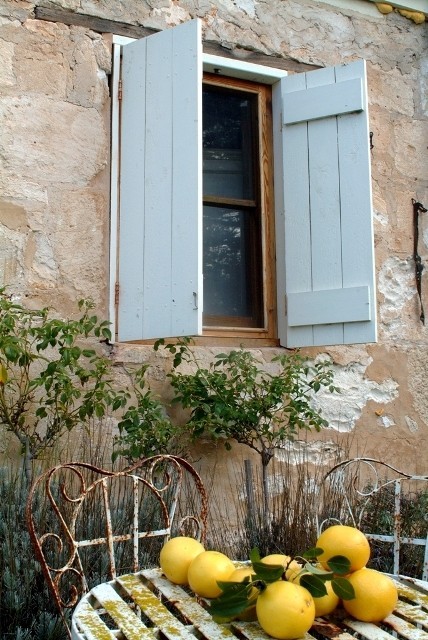 I often drift off while walking the dog on my daily trek around the neighbor and imagine what a difference custom shutters would make to some of the houses I pass.
Take classic architecture with good bones and add interesting shutters, curb appeal is as simple as that. I might also add pretty landscaping but you get the picture.
Homes with interesting shutters stand out from their peers.
Shutters loaded with authentic details are like the jewelry of architecture.
They are like the stylish accessories that compliment 'the little black dress.'
I thought it might warrant a post on the different types of shutters available and some great examples of shutters done right.
I love receiving comments from my readers and wanted to share with you my favorite comment of all time from a designer I respect and admire ~ Penelope Bianchi. Her comment is so colorful and highlights my biggest pet peeve - fake shutters. 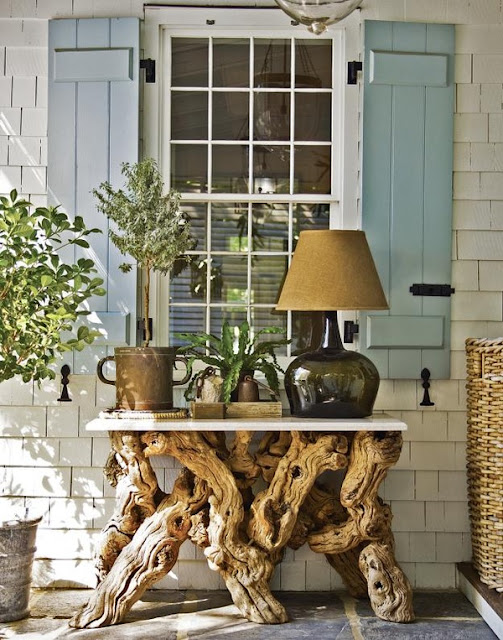 "I absolutely love shutters that work! I cannot stand shutters that do not work; do not look like they could cover the window, and are nailed onto the house! That makes a HUGE difference to me! "Falsies" Don't like fake things. I just don't. Better no shutters, than fake ones. Love these images of authentic houses!!!" 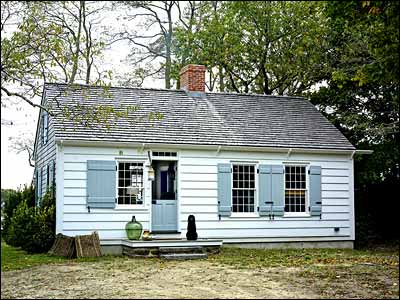 {via NY Magazine}
The picture above is the renovated fisherman's cottage on Sag Harbor of Interior Designer, Steven Gambrel. He shares my passion for authentic, working shutters. He gave this simple cottage a quick facelift by enlarging the windows, adding working shutters and a Dutch door. In his words, these small gestures made the cottage look like it had "been there for generations."
Here's another quote from Gambrel about a house he renovated for a friend that was featured many years ago in Elle Decor (hint: I couldn't get the pictures to show you.)

"The first step was to beef up the anemic architecture, so the designer {Steven Gambrel}, a history-minded graduate of the University of Virginia Architectural School, nimbly outfitted the house with made-to-order extras like working plank shutters painted classic seaside blue." 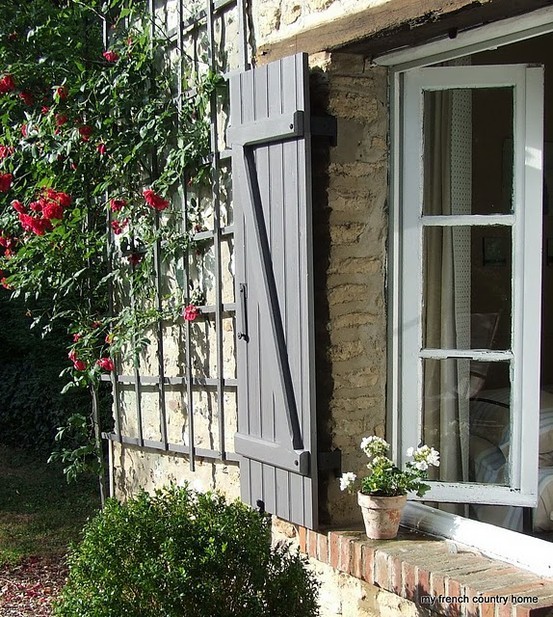 This French shutter from the photo above is from a blog I enjoy reading My French Country Home. I love looking at the pictures the author takes of the french homes and landscape. Gorgeous french shutters are everywhere! This window features a variation on the board and batten shutter with a 'z' pattern for the structural brace. 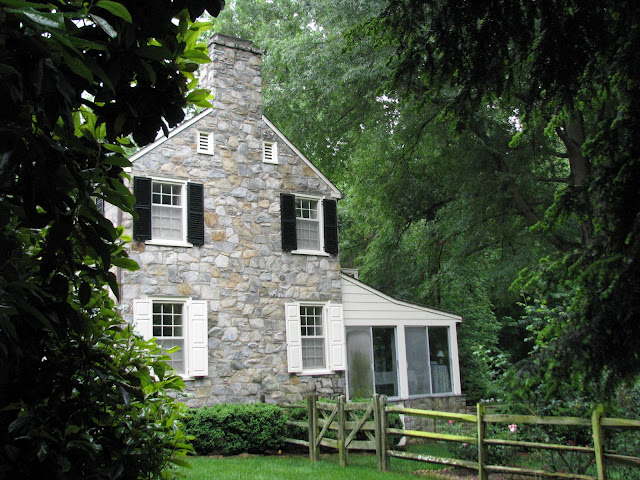 This is a beautiful stone house in my neighborhood that I walk past almost everyday. I only recently noticed that they have chosen two different styles of shutters for the first and second stories of the house and painted them in different colors...so interesting! 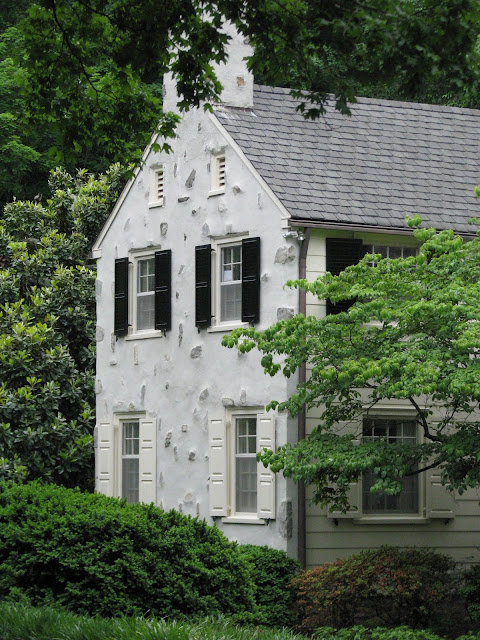 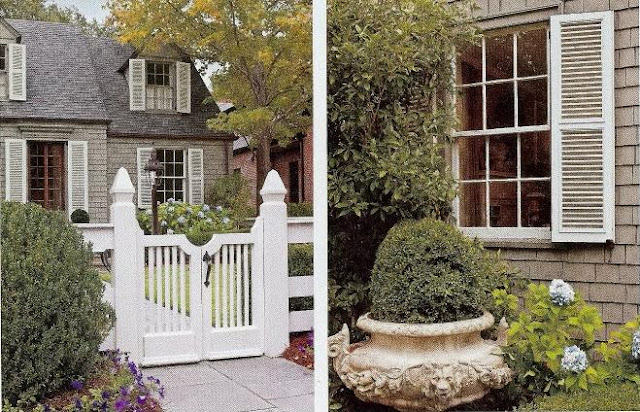 {Birmingham Home of David Ringelstein, featured in the March 2012 Southern Living}
I enjoyed the recent feature article in Southern Living that focused on the view from the curb especially this cottage in Brimingham that was updated by architect, Jeremy Corkern.
Here's a comment and a few tips from Jeremy about exterior shutters:

"The houses original shutters were simply cosmetic - a pet peeve to many architects. You can spot them from a mile away. They're thin, nailed on, and sometimes don't match the size of the opening they're supposed to cover. David's shutters, including the set on the upstairs dormers, are fully functional. The width, length, hinges, thickness, and louvre style of the shutter should be proportionate to the window it adorns." 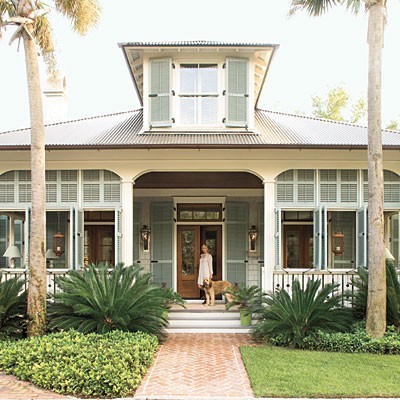 Who among us is not in love with this great coastal home and its working shutters?
I love shutters on dormers, big working shutters around the front door and the plantation shutters that give this front porch amazing curb appeal and privacy. I could sit on that front porch and drink sweet tea for days. 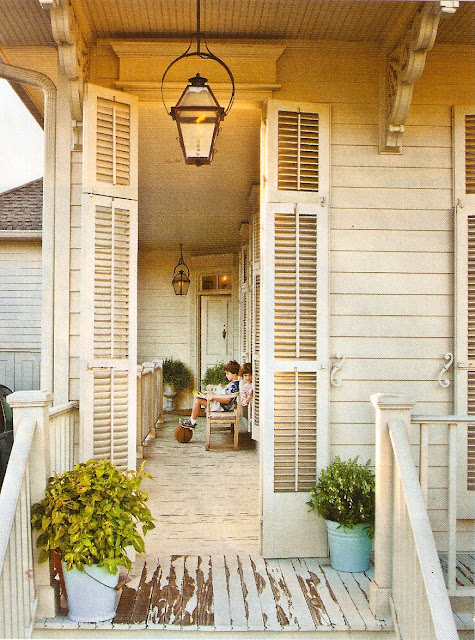 In historic old Southern towns like Charleston, Savannah and New Orleans, it is not uncommon to find the front door to the house located off of a side porch. The entrance to the side porch often had shutters that could be closed for privacy and still allow for cross ventilation.
The New Orleans home of Karina Gentinetta is a good example of this style of architecture.
Karina lost her home to Katrina and went to great lengths to build a new home that captured the patina of the old home she lost. She distressed the floor on the front porch to produce the beautiful decrepitude she once admired in her old home and searched the New Orleans salvage market for the old shutters that now frame the front entrance to the classic New Orleans side porch. Her home has been featured both in Southern Living and The New York Times. 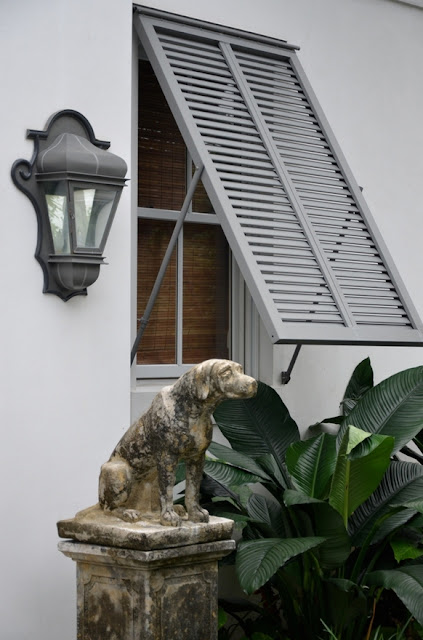 The Bermuda or awning shutters in the picture above taken by Brooke Giannetti  are from Lars Bolander's home. Bermuda shutters are hinged at the top and held open with support rods. They originated in the tropics and were designed to capture ocean breezes and provide shade from the relenting sun. 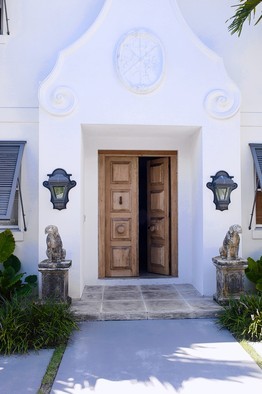 The exterior of Lars Bolander's Palm Beach home from the WSJ. 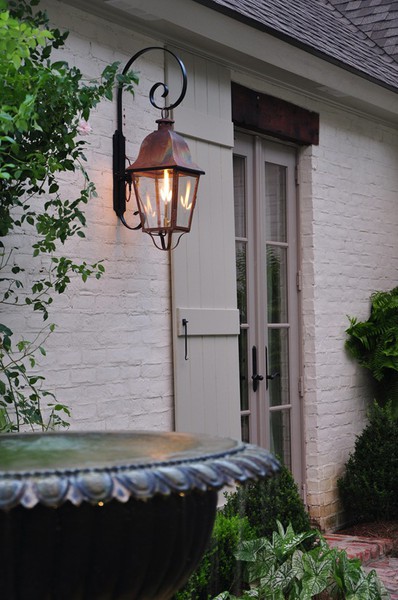 Sometimes when I am on Pinterest pinning images of inspiring old world architecture from far way European destinations I wonder how these 18th century aesthetics are going to transfer to modern architecture. The classic good looks of the architecture above prove that it can be done.
Note the simple, hand wrought hardware on the shutter. 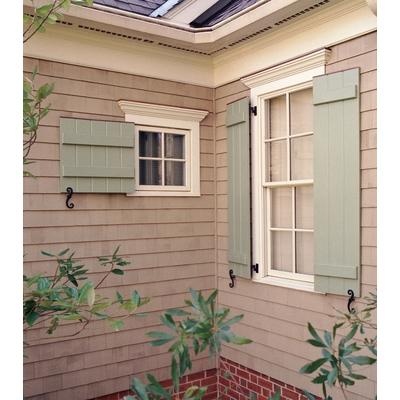 I love the look of board and batten shutters especially custom made shutters that highlight a small accent window. Look closely and you will see that these shutters have a small band of copper on the top edge to help prevent decay. The shutters above and below are from Timberlane. 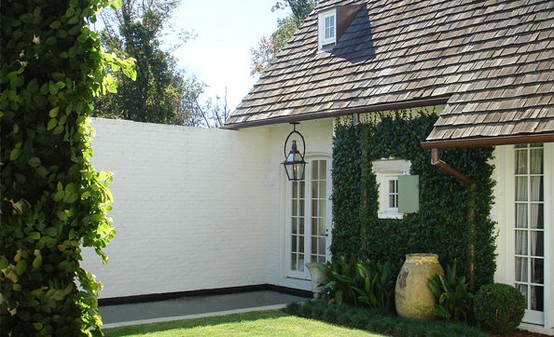 A good friend in Charlotte found a picture of board and batten shutters and went to her local home improvement store, ordered the lumber and made them herself. I love the creative spirit I see everywhere these days. I found this tutorial on Pinterest with the how-to's: 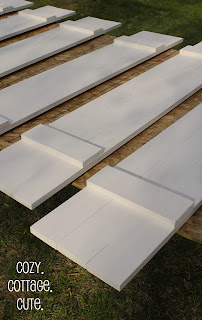 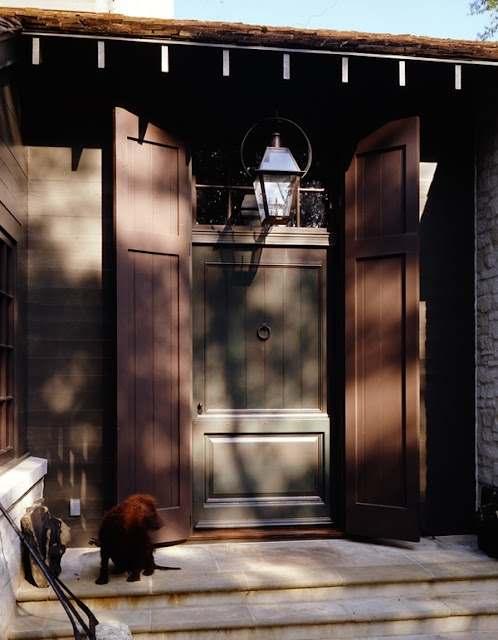 On a final note, I really love to see the front door accentuated with a spectacular pair of exterior shutters. Architect Bobby McAlpine does this with great flair. I love the cottage front door {above} and its shutters and their varying shades of brown...so sophisticated and warm. Visit McApine Tankersley on Pinterest. 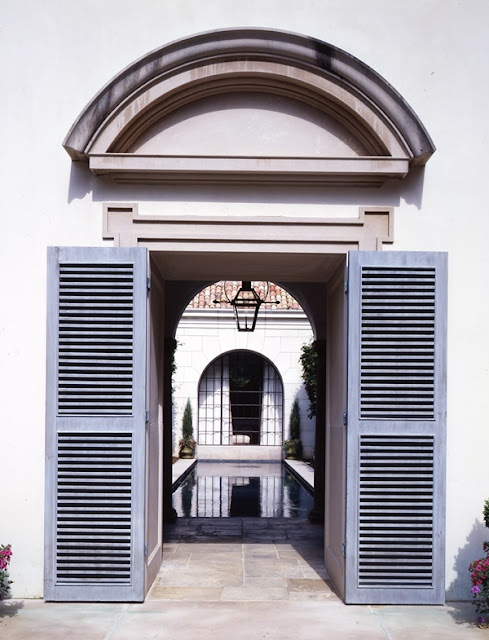 Italian Courtyard Door from McAlpine Tankersley. I love the pop of color the shutters bring to the warm, natural palette of the architecture. 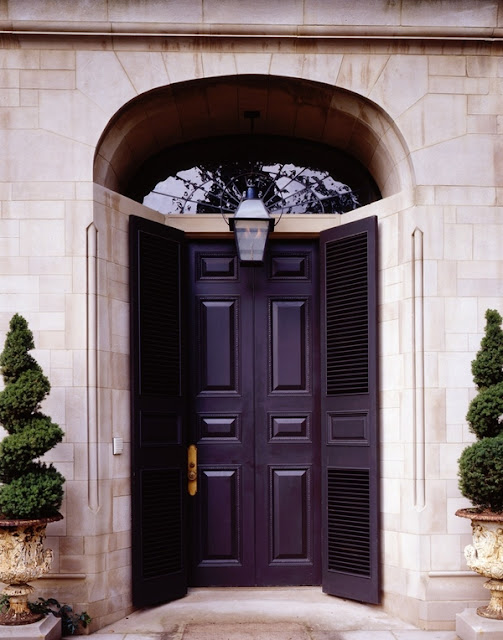 English Georgian Entrance from McAlpine Tankersley.
I like seeing how shutters are used at the entrance for a variety of distinctly different architectural styles. You might also enjoy reading their new blog: Finding Home.
The front door {below} is from a local Winston-Salem home: 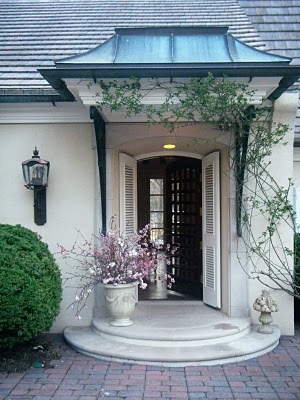